Coming to a Palace near you: The Billy Mize film

“Now it’s finally going to be played for the people who helped make it,” said filmmaker Joe Saunders, the grandson of Mize, a country music performer and television personality who, decades ago, joined Owens, Merle Haggard and their contemporaries in creating a raw and thoroughly original hybrid of rockabilly and honky-tonk that made the city famous.

“I met my grandfather as an adult — not literally — but I’ve learned so much more about him as an adult and have a deeper understanding and respect for him,” said Saunders, 35, a Los Angeles filmmaker.

The festivities kick off at 6 p.m. with, naturally, a little Bakersfield Sound music, courtesy of Tommy Hays and other local trailblazers of the 1950s and ’60s. The screening follows, at around 7 or 7:30.

Saunders hopes his grandfather will be able to attend, but a recent fall broke a vertebra in Mize’s back “and he’s kind of been immobile.” The filmmaker’s mother and aunt — Mize’s daughters — are expected, and Saunders has invited several Bakersfield Sound players, like Red Simpson and Bobby Durham. END_OF_DOCUMENT_TOKEN_TO_BE_REPLACED

LA Film Festival 2014: Unsung hero of country gets his due in ‘Billy Mize and the Bakersfield Sound’

Billy Mize was the biggest deal in California country music that you’ve probably never heard of. A founding father of the Okie-influenced Bakersfield movement, he gave early boosts to its eventual superstars Buck Owens and Merle Haggard. But Mize was an equally talented singer, picker, writer and regional television host who never quite made it beyond the L.A. airwaves. END_OF_DOCUMENT_TOKEN_TO_BE_REPLACED

The Bureau of Arts and Culture Review

History is sometimes told by outsiders, sometimes by insiders and sometimes by someone simply very interested in the facts, in this case: it’s a little of each. Billy MIZE and The Bakersfield Sound is a New Documentary that tells the story of California’s forgotten history. We have got a lot of those around this Golden State. So very much has happened out here in The West. William J. Saunders steps up to tell the story of his Grandfather, songwriter and musician, Mr. Billy Mize. A local legend of sorts for anyone living in the middle of California in the 1950’s & 1960’s. Billy Mize was a big part of what is now commonly called, ‘The Bakersfield Sound’. An offshoot of Country Western Music with its own Rock – a – Billy bar room blend of hard driving guitar, rough edged rhythm and wide audience appeal that to this today is influential to musicians such as Dave Alvin, who appears in this film to help tell the story. So too does Merle Haggard and a host of people who were there or highly influenced by the music that was created during that time. A hard driving, hard working community of people whom many migrated to California during The Great Depression ala John Steinbeck’s Grapes of Wrath and settled into middle California seeking employment in Agriculture. END_OF_DOCUMENT_TOKEN_TO_BE_REPLACED

A filmmaker profiles his grandfather, one of country music’s leading lights of the ’50s and ’60s, and the influential Central California honky-tonk scene that he helped to build.

He lent his guitar to Buck Owens when the newcomer was auditioning for a club. Merle Haggard’s first TV appearance was on his show. Waylon Jennings, Barbara Mandrell and Dean Martin, among many others, covered his songs. And no less a trendsetter than Elvis copied his sartorial style. Though he’s no household name, Billy Mize is a key figure in country music, and an affectionate documentary portrait shows that he had it all — smooth-as-silk voice, songwriting talent and good looks. But as Billy Mize and the Bakersfield Sound details, a series of exceedingly challenging personal setbacks put his career on a lower-altitude trajectory than anyone would have predicted. END_OF_DOCUMENT_TOKEN_TO_BE_REPLACED 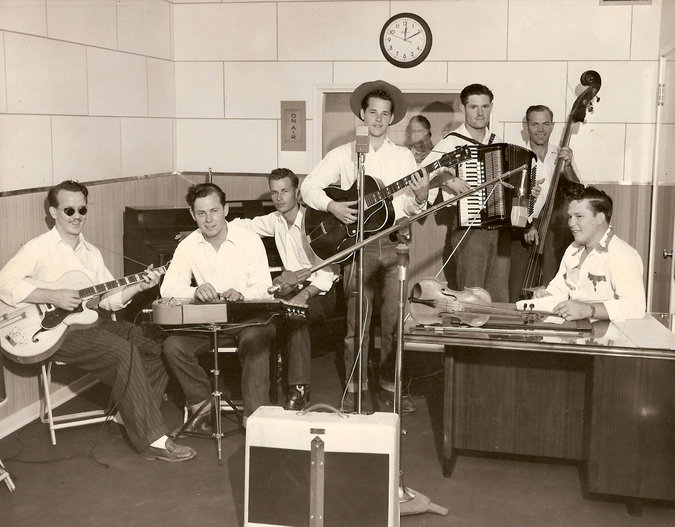 Billy Mize, center, with other Bakersfield musicians during a live radio broadcast in the 1940’s. CreditCourtesy of Billy Mize

LOS ANGELES — Even the vinyl addicts among us have to dig deep for Billy Mize.

Scratching past Wynn Stewart’s “It’s a Beautiful Day” and the Jean Shepard and Buck Owens albums, I still couldn’t find a copy of Mize master sessions like “Please Don’t Let the Blues Make You Bad,” from Columbia Records in 1965. But there he was, sure enough, with the writer’s credit for “Who’ll Buy the Wine,” on Merle Haggard’s “Pride in What I Am” album.
END_OF_DOCUMENT_TOKEN_TO_BE_REPLACED

Billy Mize and the Bakersfield Sound

Director William J Saunders talks about the making of the documentary on “First Look with Scott Cox.”

“…a damn fine piece of filmmaking. Treasure troves of rare footage and recordings are deployed to tell the exuberant Mize’s sometimes tragic story and give us a comprehensive history of the music scene that challenged Nashville’s dull dominance in the 1950s, ‘60s and beyond.”

Host a screening in your city

We’ve partnered with Tugg.com, a web-platform that enables individuals, groups, and organizations to set up personalized screenings of Billy Mize and The Bakersfield Sound in theaters and community venues across the country. Events can be used as fundraisers and can include audience discussions.